Village in Munster, Ireland Hospital (Irish: An tOspidéal or Ospidéal Ghleann Áine)[1] is a village in east County Limerick, Ireland. It is also a civil parish in the ancient barony of Smallcounty.[2] The village’s population was 1,206 in the 2016 census, but within a 2 km (1.2 mi) radius that number […]

Hospital (Irish: An tOspidéal or Ospidéal Ghleann Áine)[1] is a village in east County Limerick, Ireland. It is also a civil parish in the ancient barony of Smallcounty.[2] The village’s population was 1,206 in the 2016 census, but within a 2 km (1.2 mi) radius that number more than doubles. The village itself is situated in the townland of Barrysfarm,[3] one of 11 in the civil parish. It lies on the River Mahore, a tributary of the River Camogue. 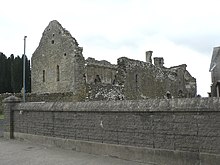 The village acquired its name from the crusading Knights Hospitaller who built the archaeologically significant Hospital Church here before 1215. This church has the remains of three interesting[citation needed] tombs, dating from the 13th and 14th centuries.

An alternative explanation, from the biography of Sir Valentine Browne, Surveyor General of Ireland (who was awarded lands in the area by Queen Elizabeth I of England), is that the village anciently formed part of the parish of Aney, and derived its name from a hospital for Knights Templar, founded in 1226 by Geoffry de Marisco, then Lord Justice of Ireland.

The “Old Cork Road” from Limerick to Mitchelstown and Cork (also known today as the R513) passes through the village.

In 2002, the village had nine pubs – there are now only four. The village’s secondary school was completed in 2000 and has around 1,000 students.[citation needed] There is also a primary school which was completed in the summer of 2004. Hospital is also home to one of Limerick’s Youthreach schools. The village shares a GAA club (Hospital-Herbertstown GAA) with the village of Herbertstown. Former Limerick GAA captain Damien Reale is a member of the club. Hospital soccer team was founded in 1881 by Sir P.J. Butler. Formerly known as Hospital Crusaders, today it is called Kilfrush Crusaders. Other recreational bodies include the local tennis and handball clubs.

Hospital also has an active Family Resource Centre, located on the Knockainey Road.

There is a stone circle nearby at Ballinamona.

The village celebrated the 800th Anniversary of its foundation in 2015.

Hospital has its own local area development plan which lays out plans and proposals for the future expansion of the village.[4]

Sat Nov 28 , 2020
Faran Fagen  |  Special to The Palm Beach Post Dr. Mitchell Josephs wants you to know that dentists can be funny and have other interests in addition to teeth. “Movies and TV have portrayed dentists as weirdo nerds or psychos like Steve Martin in ‘Little Shop of Horrors,’” Josephs said. “Some […]